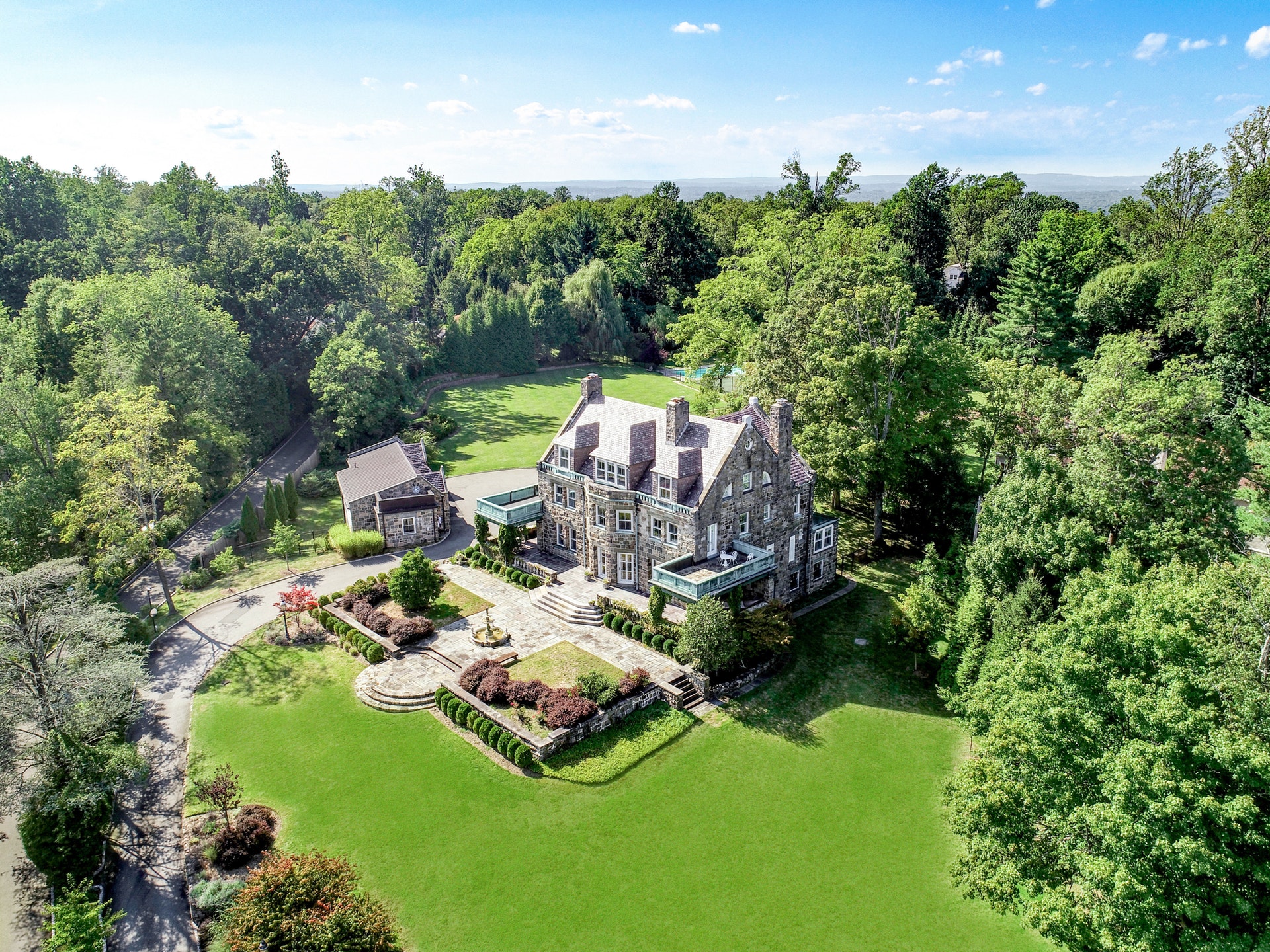 Welcome to "Appin", a residence of historic significance built by John Stewart Jr. situated on one of the most prestigious streets in Short Hills. This spectacular 2.3 acre property offers it all for sports enthusiasts boasting one of only a few residential indoor squash courts in the US as well as outdoor tennis, basketball, swimming and plenty of room for football and soccer. The stone mansion, lovingly restored by its current owners, awaits visitors at the end of a long drive creating a commanding presence and promising no less, elegantly framed by sprawling lush flat lawns, stone terraces, a 4-car over-sized garage for car aficionados and a pool house with kitchen, full bath and laundry. The impressive formal rooms offer lofty ceilings, striking chestnut detailing and a soaring staircase to all levels.

Click here to see the MLS listing and photos for this home.  Additional information not found on the MLS can be found below.

In this virtual tour you will be able to walk through the home, see the floor plan, view additional photos of the property, arrange furniture using the floor planner and even view an area map.

John A. Stewart Jr. built the stone house now known as 85 Stewart Road on the property that he purchased in 1886 from Sarah A. C. Seavers. Before that time the property was part of an evidently undeveloped twenty four-acre tract of land that changed hands several times in the middle decades of the 19th century and for which no title deed earlier than 1833 has been discovered. Stewart paid $7,000 for the lot in 1886, a substantial increase from its price of $675 in 1854 or even the 1860 price of $2,400. The increased value no doubt reflected the efforts of Stewart Hartshorn to create an "ideal" suburban community in the picturesque Short Hills section of Millburn Township. Hartshorn, a successful businessman who had suffered poor health, began to acquire property there in the 1870s. He then set about constructing roads that followed the contours of the land, building houses of individual design on substantial lots which he rented to prosperous city people, and selling lots to others who agreed to erect private residences that complied with his standards. By 1884, Hartshorn had built thirty-three houses as well as the "Music Ball", the social center of his community.

John A. Stewart Jr. (1857-1946) is said to have been a friend of Stewart Hartshorn and to have come to Short Hills because of his interest in horses. Born in Irvington-on­Hudson, he was the son of John A. Stewart, financial advisor to Abraham Lincoln, founder of the United States Trust Company, and chairman of that bank's board of trustees at his death in 1926 at the age of 104. John A. Stewart Jr. graduated in 1879 from Princeton University where he gained notice in tract and gymnastics and in 1881 from Columbia Law School. Thereafter he was associated with Sidney J. Smith in the real estate firm of Smith and Stewart until his retirement about 1920.

Stewart moved to Short Hills in 1885 and lived on Old Short Hills Road until the completion in 1887 of his sub­stantial stone house which he named "Appin". In 1886 and 1P87 he acquired the additional property from Sarah Seavers adjacent to his original purchase. One of the deeds (Essex County Book M-23, page 109) includes a map which shows the structures on Stewart's property that evidently were erected the previous year. The largest one is L-shaped and undoubt­edly is the present house. The second, near the northeast corner of the lot, is identified as the "gardener's cottage"; it apparently forms the core of the dwelling now at that site. The third, standing directly to the north of the house, probably is the existing carriage house, now converted into residential use.

Both outbuildings were built as simple, late Victorian, vernacular structures, the house was designed by an unknown architect to reflect the traditional architecture of England's West Country. Evocative of the stone cottages and farmhouses of the Cotswold Hills, it is a forthright, L­shaped block with rough ashlar stone walls, a parapeted gable roof, and a simple, largely symmetrical fenestration. More typical of late 19th-century suburban dwellings are its mas­sive, gable-end porches, the south-side terrace and bay window, and the elegantly detailed interior. The well pre­served house is set back from the street on a small knoll. It’s surrounding grounds are naturally landscaped with informal plantings and fieldstone retaining walls.

Once settled in their new house, Stewart and his wife Anne became involved in the life of the community. A keen hunting man, Stewart was Master of the Essex Fox Hounds in 1888-1889. In 1916, he joined the Short Hills Club. In New York, he belonged to the Union Club and the Holland Masonic Lodge. Anne Stewart together with eight other women formed the Short Hills Garden Club in 1906. This was one of the first clubs of its kind in America. Subsequently, it became a founding member of the Garden Club of America and a charter member in 1925 of the Garden Club of New Jersey. From 1925 to 1929 Mrs. Stewart served three terms as president of the Garden Club of America.

The Stewarts maintained their residence at "Appin" for the remainder of their lives. Mrs. Stewart. died in 1935 and her husband in 1946 at the age of 89. Their son, John A. Stewart III, and granddaughter, Mrs. T. Wilkinson Satter-Thwaite, both of Short Hills, survived him, as did two great-grandchildren.

John A. Stewart III, who was a member of the New York Stock Exchange, served as his father's executor. In 1948, he and his wife sold the Appin property (consisting of two tracts, one 9.5 acres and the other .18 acre) to John and Shirley Steinback. The Steinbacks divided the property into several lots and later that year sold lot No. 6 on which stood the house to Thomas and Mary Logan. It was at that time that presumably the carriage house and the gardener’s cottage were converted into primary residences. The main house changed hands several times again until its purchase by the present owners, Paul and Shirely Sarpi, in 1978. 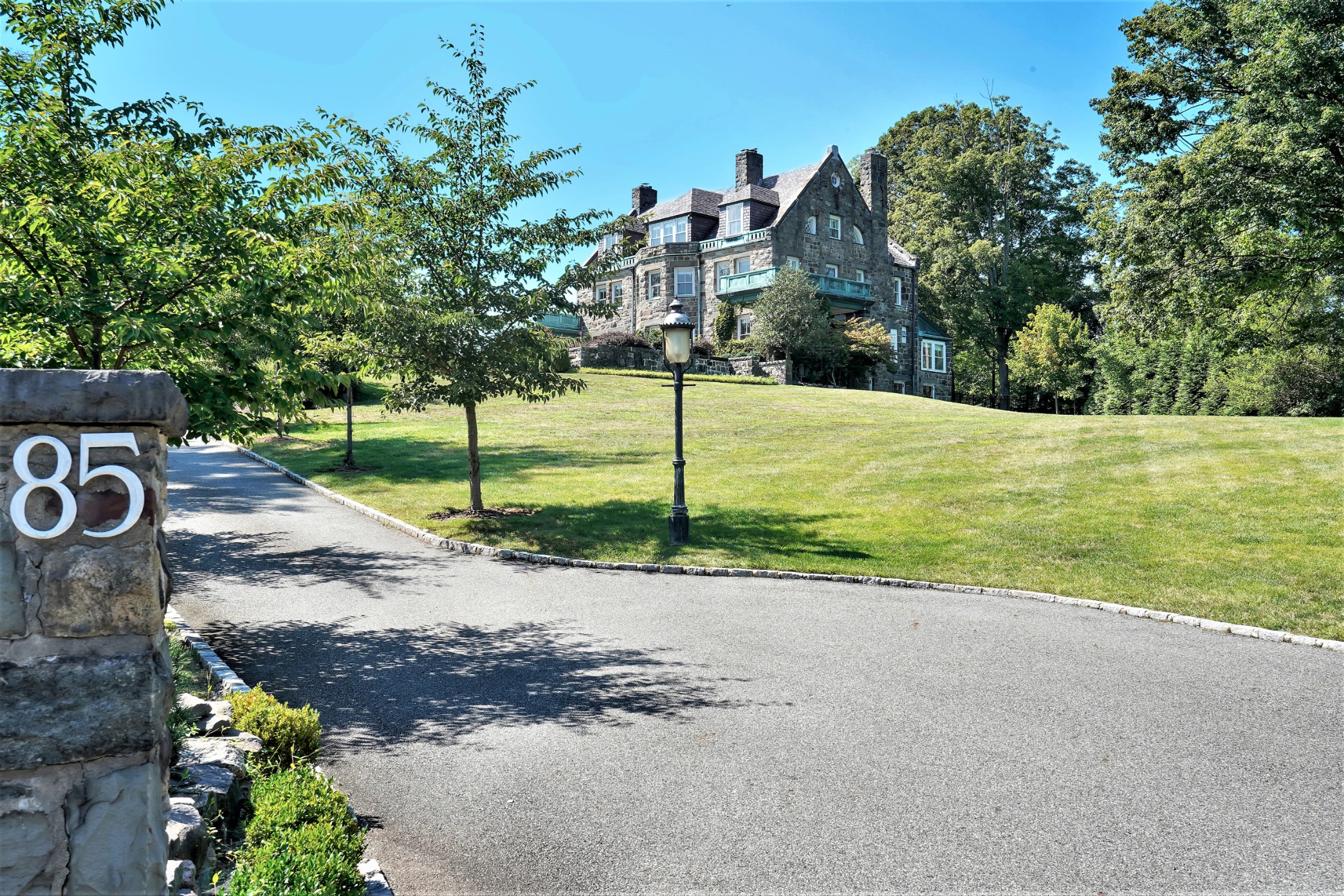 Entry to this magnificent home is accessed from a quiet street, up a winding drive, creating a commanding presence and promising no less. Peace and privacy abound in this idyllic setting, feeling far from the world yet only a few minutes from the Short Hills NJ Transit Train Station which offers convenient service to both Hoboken and New York Penn Station. 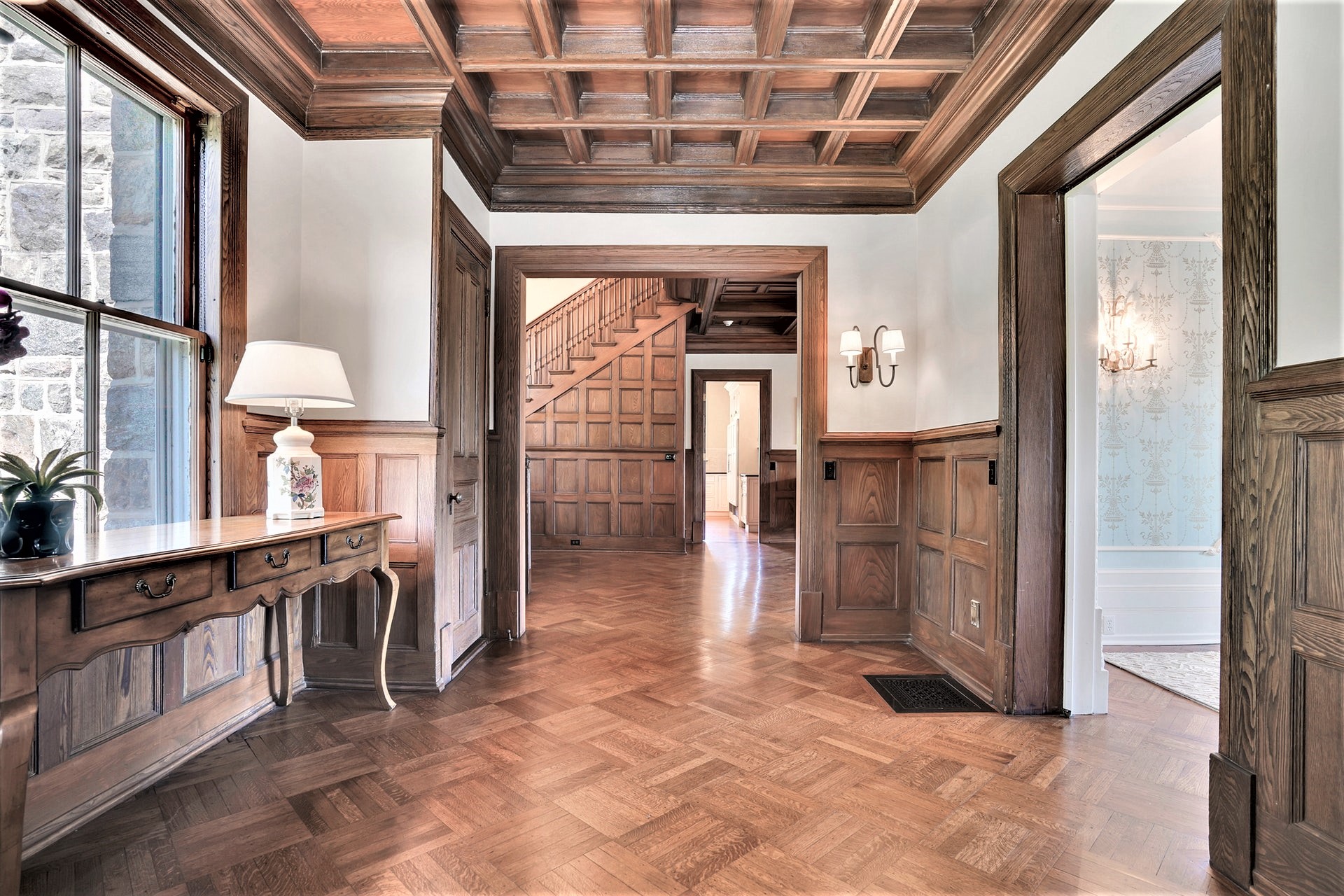 The impressive Entry Hall, with original staircase, custom doorways, and paneled ceiling, offers guests a glimpse of the grandeur that awaits every turn. Flanking the Entry Hall are an elegant fireside Living Room and Great Room both boasting expansive windows and offering spaces that are perfect for both intimate gatherings and large events. 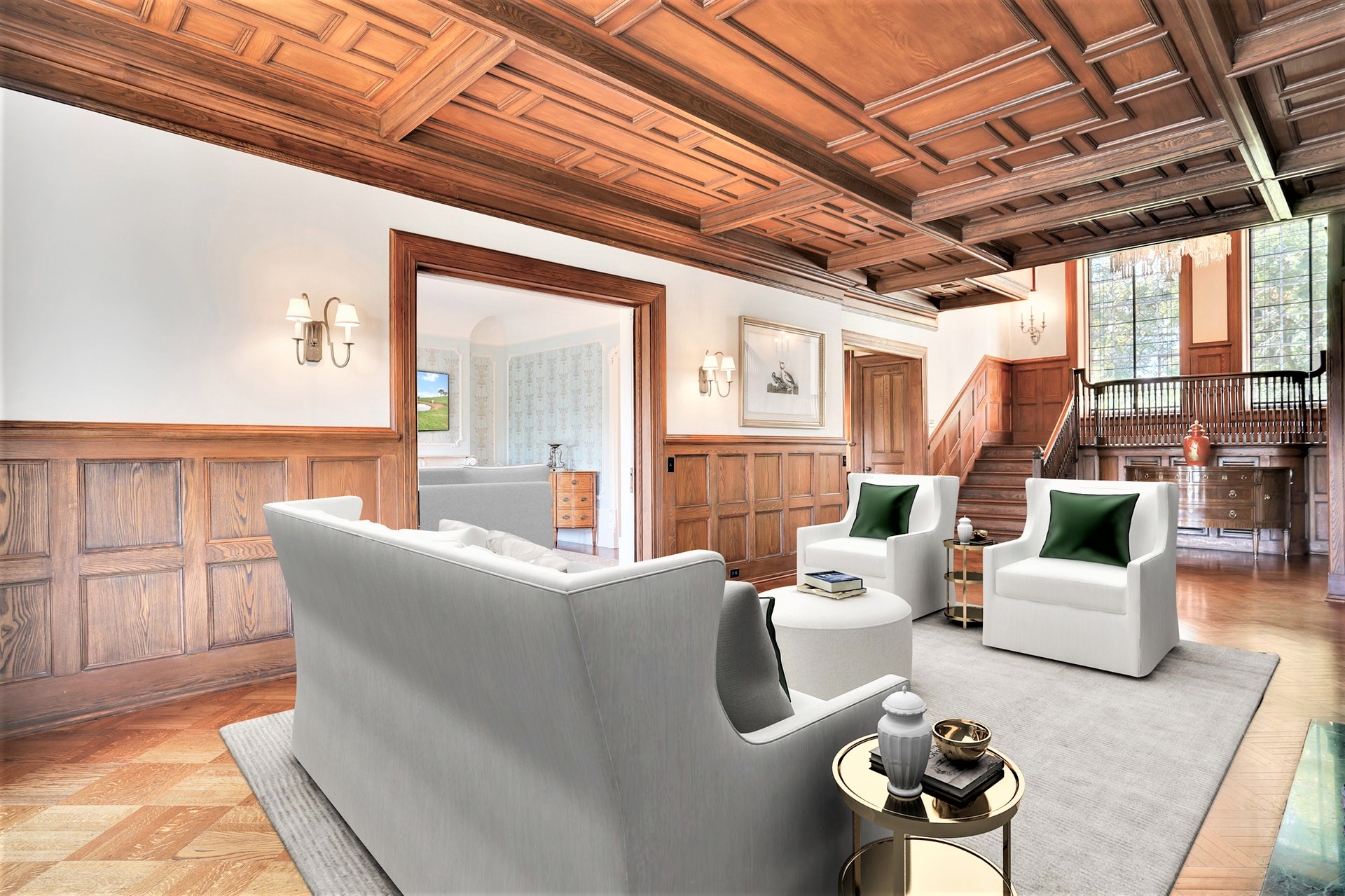 Anchored on beautiful hardwood flooring and set beneath a high ceiling with substantial high-gloss moldings, expansive windows, accent lighting and architectural interest at every turn, the fireside formal Living Room is elegant, welcoming guests with warmth and grandeur. 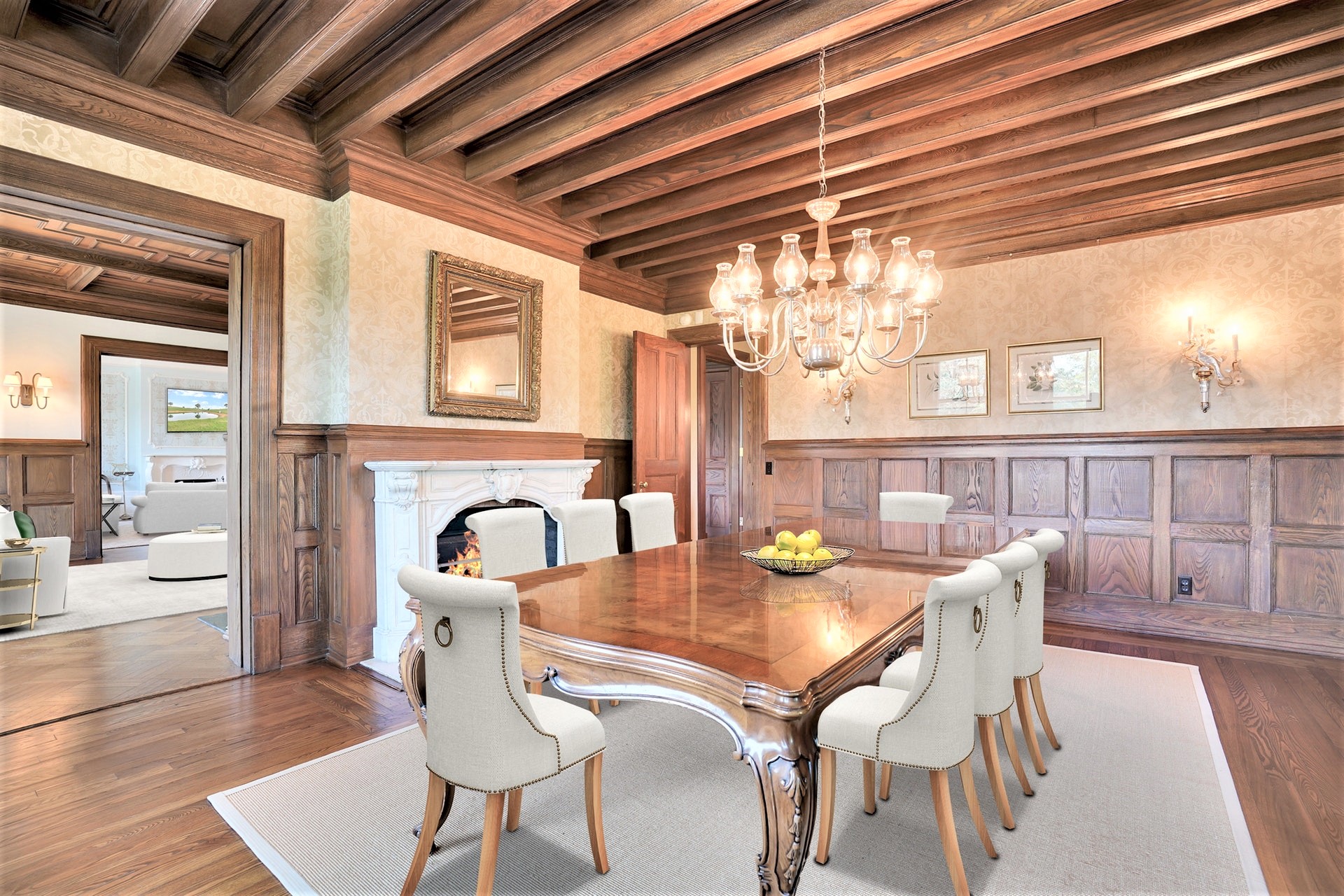 A banquet-scale formal fireside Dining Room with custom wainscotting and multiple windows sets the tone for lavish entertaining under dramatic moldings, offering the perfect space for both small and large dinner gatherings. Holidays and every day will offer a very special experience. 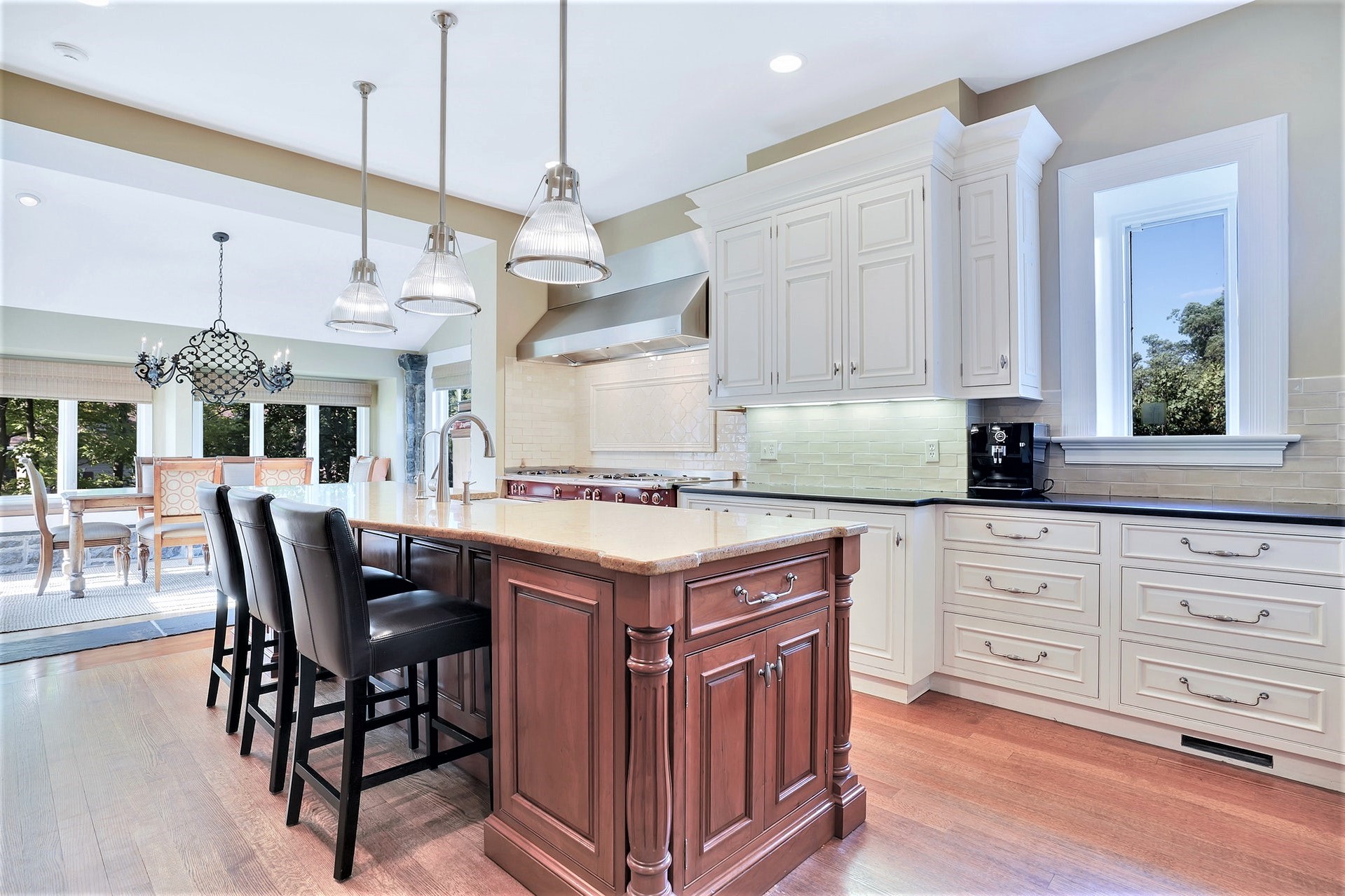 At the very heart of the home is the spacious Kitchen with walls of windows, offering complete visibility to the resort-like rear property. The gourmet Kitchen is high-end, embellished with custom cabinetry, natural stone countertops, Lacanche gas range, dishwasher, Sub-Zero refrigerator & freezer and oversized center island with seating. 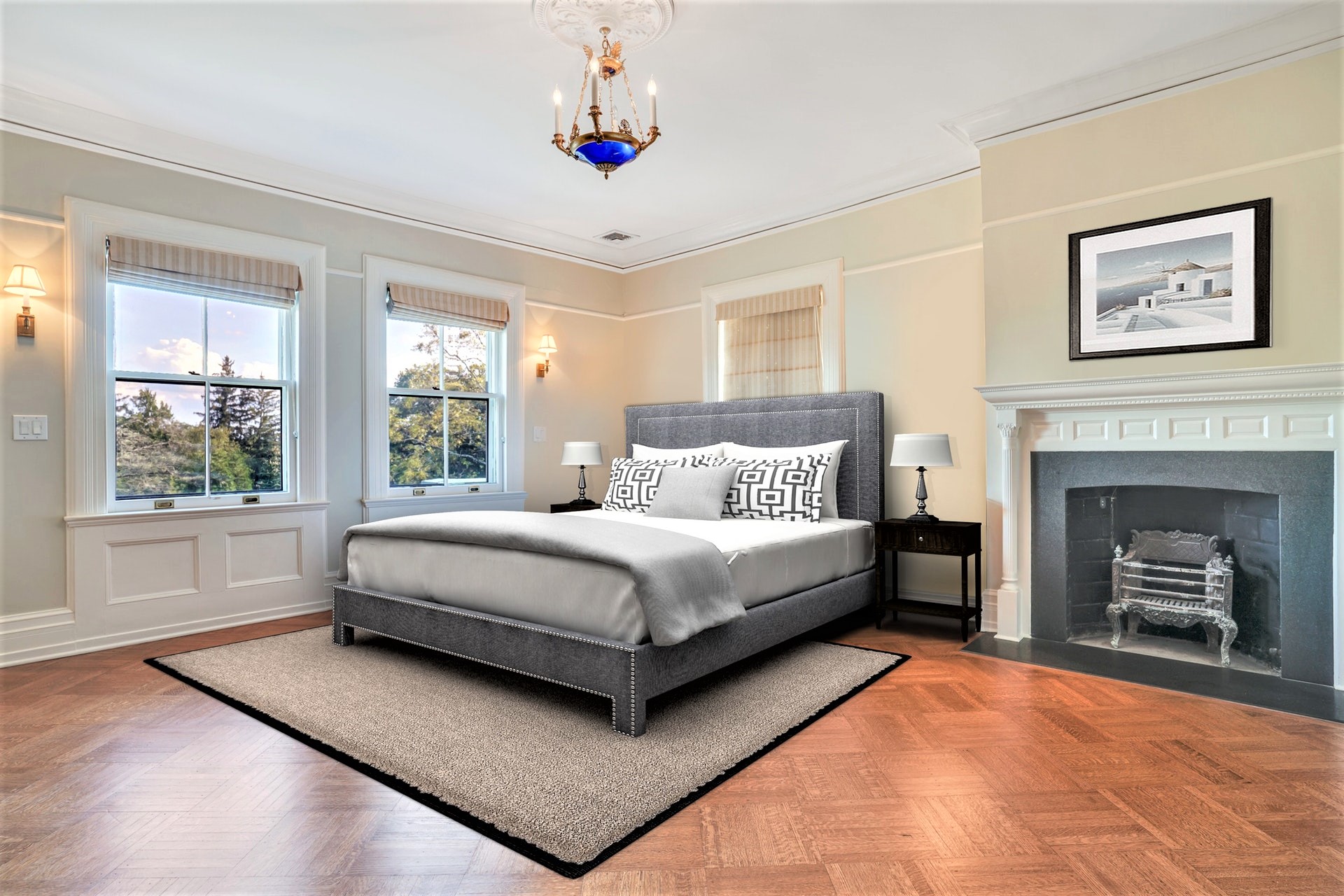 The upstairs hall is bright and dramatic with lofty views of the Entry Hall below, accessed by a grand staircase leading to 4 spacious and bright bedrooms. The luxurious Master Suite is reminiscent of a Bed and Breakfast, offering the homeowner a serene, generously sized fireside bedroom with intricate millwork. The bedroom offers generous views of the perfectly manicured grounds. 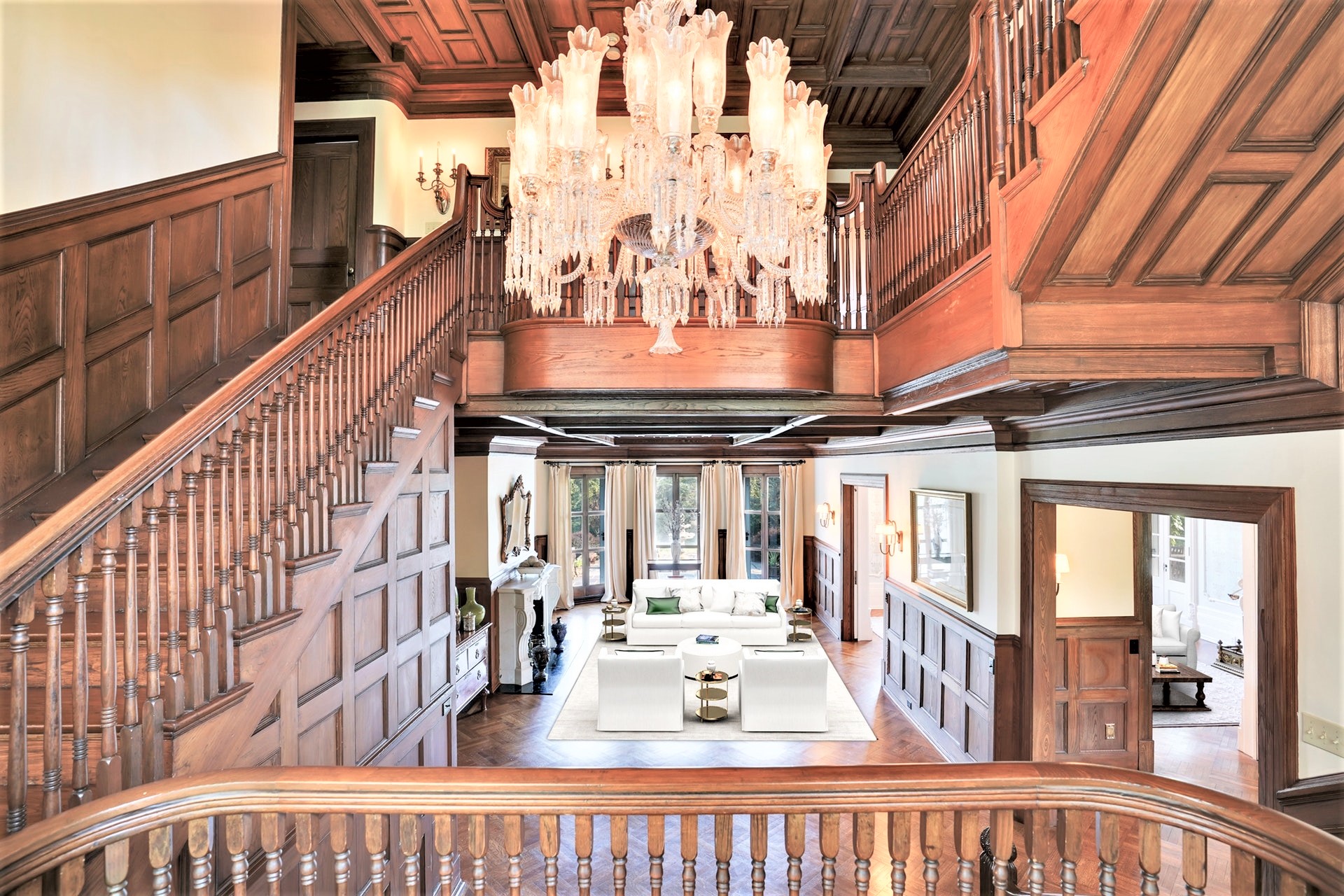 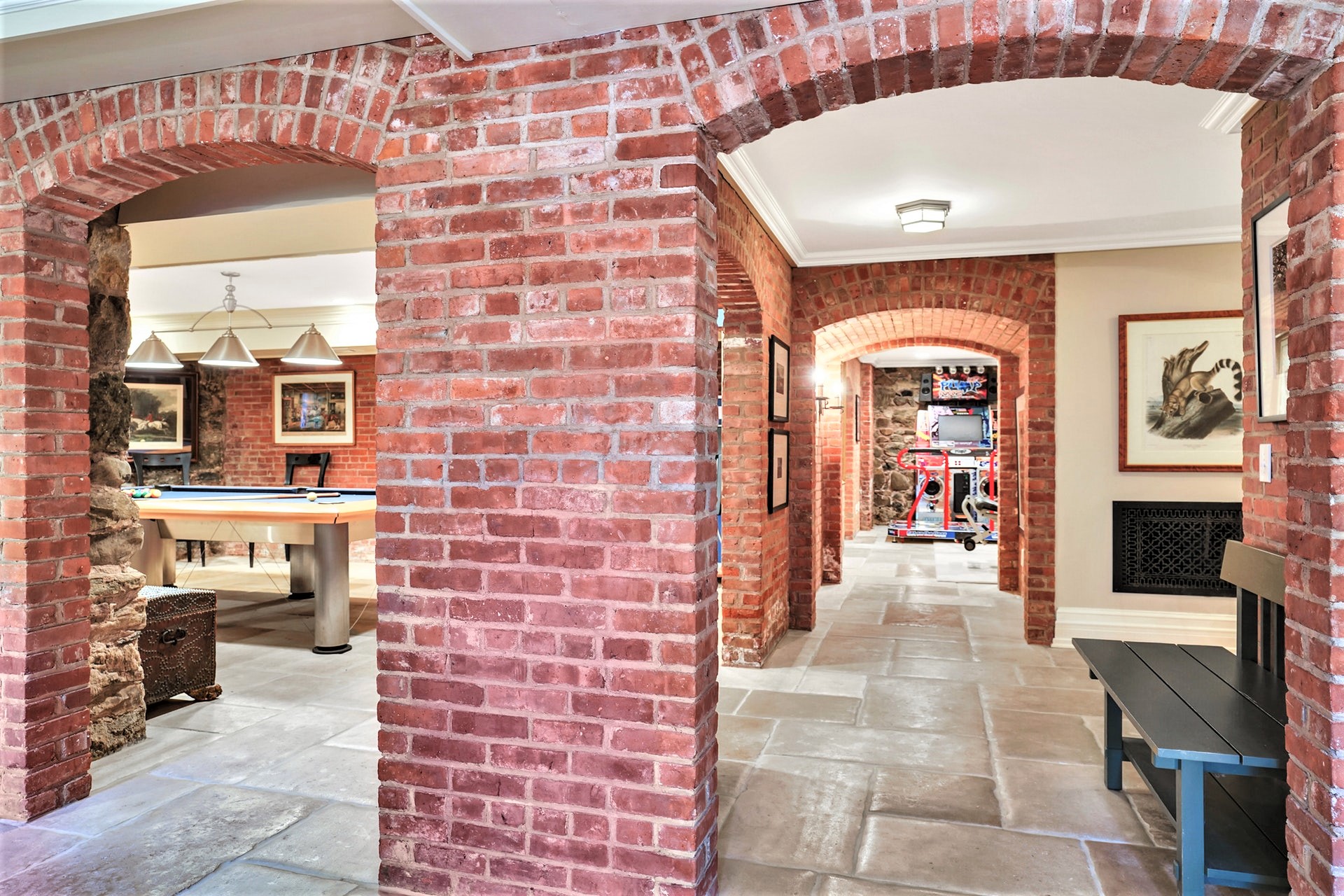 The Lower Level is expansive, with an assortment of rooms created for the individual tastes of its occupants including a Recreation Room, Exercise Room and Powder Room. Two Storage Rooms and a Utility Room also reside on this level. 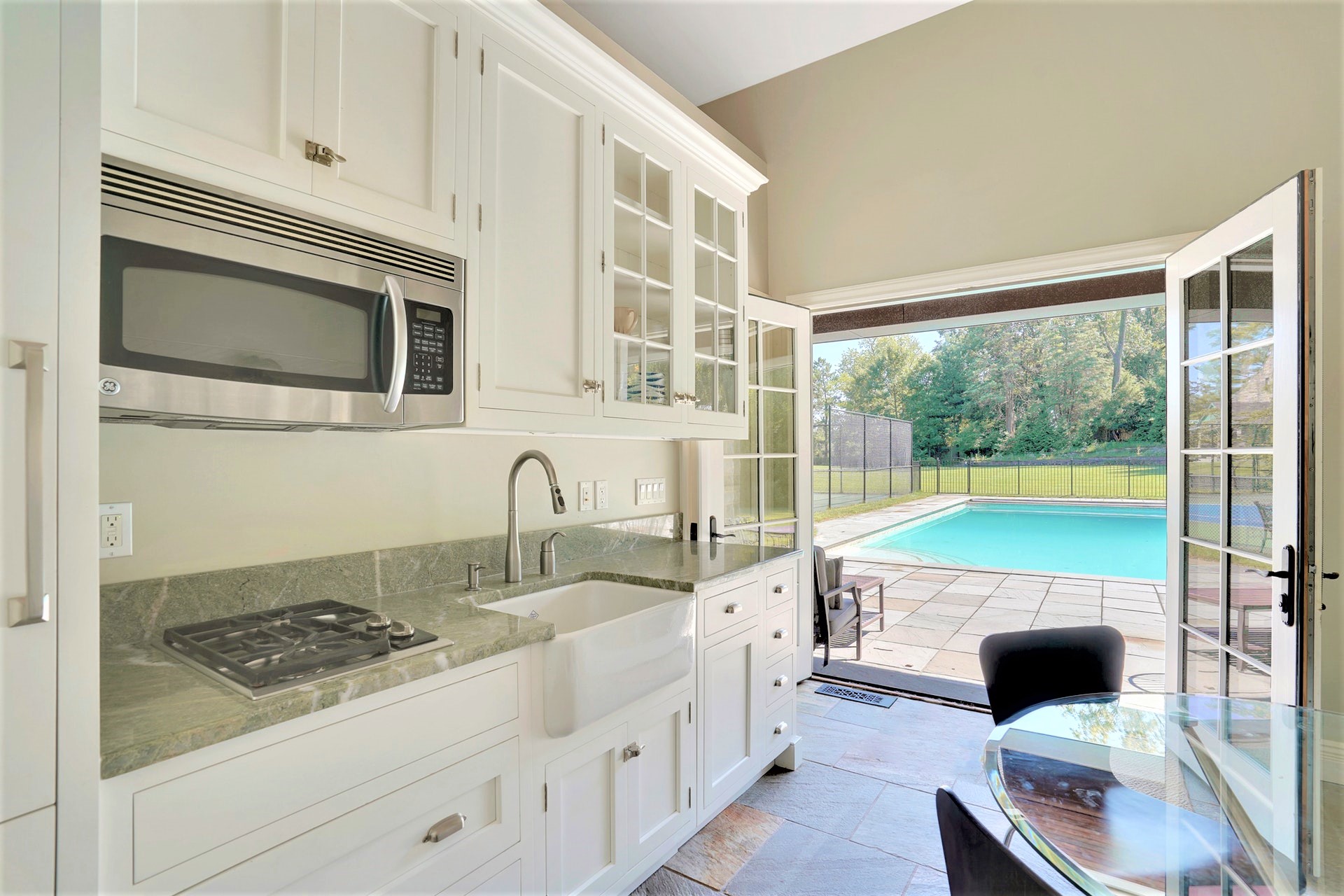 At the end of the sweeping lawn is a wonderful surprise -- an idyllic heated in-ground pool, totally secluded from the rest of the world offering a tranquil retreat. A nearby pool house / cabana offers a changing room, full bath and kitchenette  facilities. Here one can also find a regulation-sized tennis court. 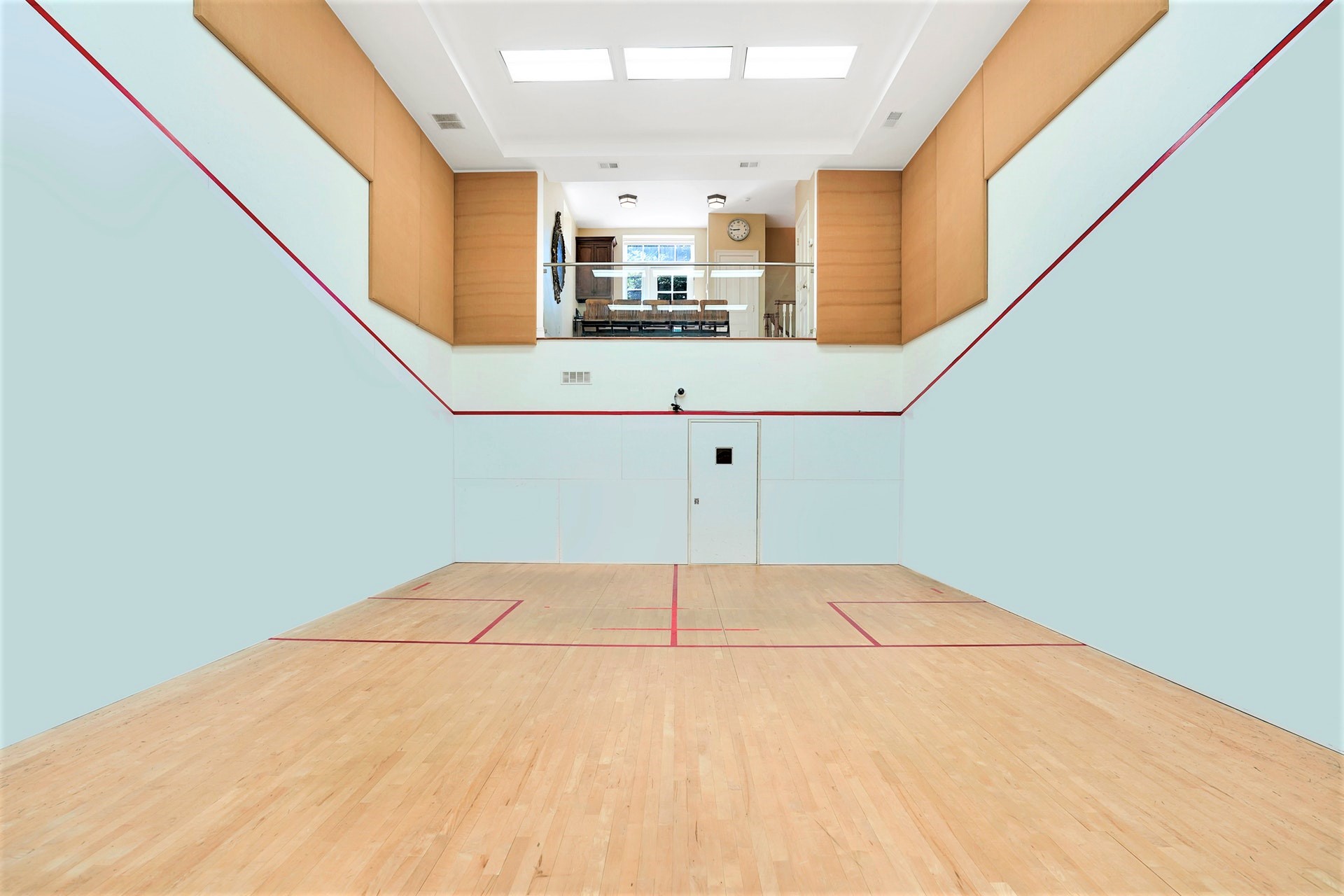 One of the only homes in Short Hills to offer a regulation-sized squash court, this home truly offers it all for even the most discerning buyer.

This estate awaits that extraordinary buyer who appreciates fine craftsmanship, modern conveniences and all that Short Hills has to offer.

The information above is deemed to be accurate but is not guaranteed and is subject to change. 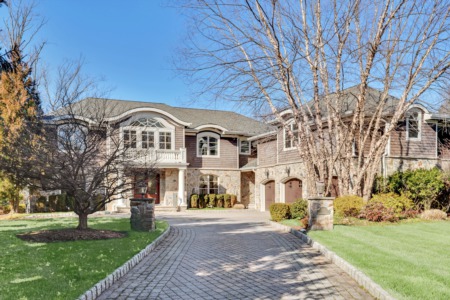